I found a flower on the floor of the living room.  It must have fallen out of the vase over the fireplace.  I picked it up and ran over to my mom.  Entire-body wiggle, wiggle, wiggle while I shoved the flower in her face!
Mom!  Hey mom!  I found this flower!  Isn't it awesome! 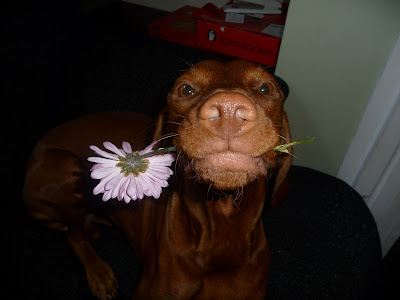 I found it just for you!  Aren't I the best redheaded daughter in the whole world?
(Don't worry.  No flowers were harmed when taking this picture.  My mom caught me before I nibbled it.  Bummer.)
Scribbled by Laila at Friday, October 29, 2010 6 comments:

Why is my dad ignoring me? I think it's kind of rude that he is gone all day, and then comes home and falls asleep on the couch. 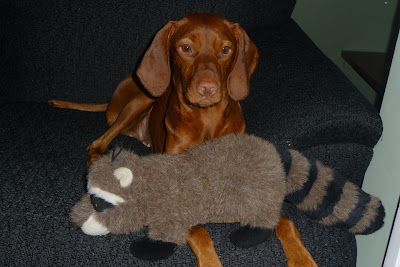 Now, I get that he works 40+ hours a week, and that he is studying for the Maryland Professional Engineering Exam, and that he is exhausted beyond belief, but does that mean that he is allowed to nap when I want to play?
Maybe if I shove my raccoon in his face, he'll wake up and play with me.  Hey dad, hey dad, hey dad!!!!   Are you awake yet?  Are you awake yet?
Scribbled by Laila at Tuesday, October 26, 2010 3 comments:

One of the coolest things about being a city pup is that famous people come to visit my neighborhood all the time!

Yesterday, my mom came home from a busy afternoon of meetings.  One of the ladies that she had met with mentioned that former President of the United States Bill Clinton was going to be speaking at a park in South Baltimore at 3:00pm.  She thought it was Riverside Park, which is one of my favorite parks.  Well, it was 3:30pm by the time my mom got home, which wasn't enough time to take me on a walk and also go to the rally, so she popped into the house, grabbed me, and we ran down the street toward the park.  As we got closer to the park, it was obvious that we were going to the wrong park:  no security points, no secret service vehicles, no crowds.  Just life as normal.  Oh, well.  We must have been mistaken.  My mom figured that they were probably going to hold the rally at Fort McHenry, which was too far to walk to while wearing a nice suit.  On our walk home, we saw a bunch of neon-green flyers on the ground.  My mom picked one up.
"Bill Clinton to speak at Federal Hill park on Thursday, October 21.  Gates open at 3:00pm."
She checked the time:  3:55pm
Shoot.  She hoped that it wasn't too late.  Maybe we could still make it if we hurried!
When we got to the park, it was obvious that we had come to the right place.
I mean, look at the park!  They even set up a huge stage and even a spot for media.
For some reason, I was not allowed in the media box.  I could have gotten some up-close and personal shots of the former Mr. President, but I guess having red hair is a bad thing.  Discrimination, I tell you.
Luckily, even though we showed up an hour after the gates opened, none of the speakers had shown up yet.  So, we waited.
While we waited, lots of people stopped to say hello:
"what kind of dog is that?"
"she's beautiful!"
"can I pet her?"
"how old is she?  I bet she's just a puppy."
"I bet she's fast when you let her off-leash."
"she is the calmest Vizsla that I've ever met!"
"do you want me to take a picture of you and your dog?"

How nice!  Yes, please!
An older gentleman who owned a Vizsla for 14 years before he passed away offered to take a picture of my mom and I.  Thank you, Sir!
A lot of parents brought their babies to the event.  The babies liked me a lot:  "Goggie!"  I was so good and sat like a statue as they patted and prodded and mispronounced my name.  The older ones got kisses -- especially the little girl with the lollipop.  I liked her a lot.  She tasted like strawberry.
And then finally, he arrived...
Yay for famous people!
Ok, mom, we saw him.  Now we can go.  It is C.O.L.D.
We did a stop at the "super secret" dog park on the way home, and I found out that Tucker, another South Baltimore Vizsla, has been coming to my park without me even knowing about it!  I met him when he was just a puppy, so hopefully we can play at the park together soon.
Scribbled by Laila at Friday, October 22, 2010 2 comments: 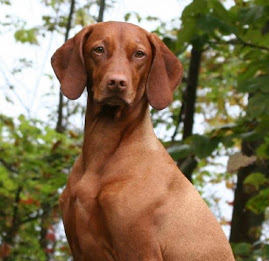 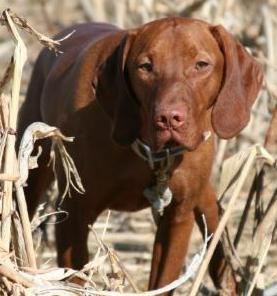